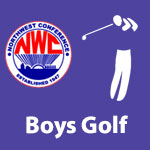 The coaches voted Daryl Dowdy of Lincolnview as Coach of the Year. Junior Joshah Rager of Lincolnview earned Player of the Year honors for the second straight year by virtue of points earned during each regular season match. Rager was joined on the NWC First Team by Kayne Richardson of Allen East, Aaron Belcher of Bluffton Mitchell Youngpeter of Spencerville, Parker Frey of Allen East, Connor Lautzenheiser of Crestview and Cade McGarvey of Paulding.