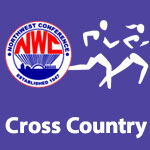 Lincolnview’s Bayley Tow ran the best individual time of 16:21 in defeating last year’s winner Mycah Grandstaff (16:59) of Crestview. Bayley Tow was voted by the coaches as NWC Male Runner of the Year. Alex Rodriguez (17:27) of Lincolnview was the third place finisher in the boys’ race.