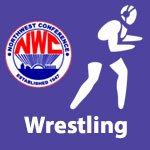 In one of the closest tournaments in conference history, Paulding edged Spencerville by just two points to win the 2013 Northwest Conference Wrestling Tournament at Lima Central Catholic. The Panthers finished with 256 points to 254 for the Bearcats. LCC placed third with 225 points.

Last year’s champion, Delphos Jefferson, had the most individual winners (3) but finished fifth overall two points behind Columbus Grove. Eight of the nine participating schools had at least one individual champion.

LCC senior Brandon McCormick (138) was named Wrestler of The Year in the NWC. Brandon is a four-time NWC champion. Josh Neilson of Paulding was voted by his peers as NWC Coach of The Year.