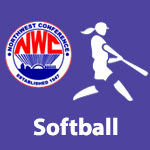 Coach Wilkerson led LCC to a 7-2 conference record and a three way share of the NWC championship with Crestview and Lincolnview.